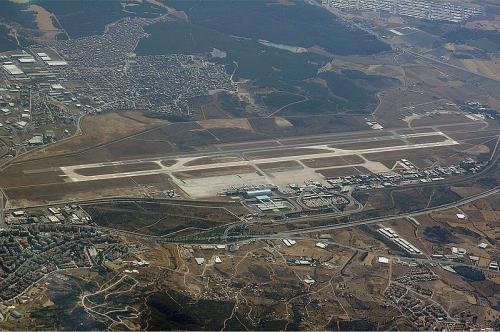 Adnan Menderes Airport
Adnan Menderes Airport (IATA: ADB, ICAO: LTBJ) is the international airport serving the province of Izmir in Turkey. It lies within 14 km (8.7 mi) south of the city center, in Gaziemir district. His name is Adnan Menderes (1899-1961) who served as prime minister between 1950 and 1960. The airport is owned by the State Airports Authority and the operator is TAV Airports.

Adnan Menderes Airport, which hosts 12,178,100 passengers and 86,994 airplanes in 2015, is the busiest airport in the country. In terms of cargo traffic, 24,640 tons is the third among the airports in the country.
Before Adnan Menderes Airport, formerly Cumaovasi Airport, was rebuilt, civic flights in Izmir were carried out at Cigli Airport. Cumai Airport was being deployed when Cigli Airport was undergoing repairs; But due to technical insufficiencies, night flights could not be made and big airplanes could not land on the piste. Cumaovası Airport was also the first aviation museum of Turkey. Opened on May 15, 1971 and open until 1978, the museum then moved to Istanbul.

Plans for collecting Cumaovasi airport civil flights with increasing need were created at the beginning of the 1980s and the surrounding lands were expropriated. The foundation of the airport was Kenan Evren, who was the chief of staff during the 1980 military coup in May 1984 and then assumed the presidency. The project amount was determined as 15 billion 300 million pounds. Although the airport was expected to enter service in 1987, the project could not be completed due to budget shortcomings.

The new airport, named by former prime minister Adnan Menderes, was the second largest airport in Turkey after Istanbul when it entered service on 17 November 1987. Evren wanted to give the airport the name of September 9, symbolizing the "liberation from enemy occupation" of Izmir, but the government did not fit it. In the memoirs of the universe, he said, "They think they will multiply their votes by giving this name."

Due to the need for capacity that emerged in the 2000s, DHMİ has set out to expand the Adnan Menderes Airport International Terminal. It was decided to build the project with build-operate-transfer model and 5 million journey terminal construction is foreseen. On August 16, 2004, Havaş and Bayındır Construction Joint Venture Group announced that they had won the bid with a total of 125m euros for 6 years, 7 months and 29 days of operation. In the initiative, Havaş had a share of 65 percent and Bayındır had a 35 percent share, and the construction was expected to be completed in 24 months.
While the construction of the terminal continued in the middle of 2005, 60 percent of Havaş's shares were sold to TAV, which also operated Istanbul Atatürk Airport International Terminal by Ciner Holding. The new terminal opened eight months ago and cost 150 million euros. The new terminal opened on September 9, 2006 and its operation was undertaken by TAV.

In November 2011 DHMİ opened a tender for the renovation of the Adnan Menderes Airport Domestic Terminal and the operation of domestic and international lines until the end of 2032. TAV Airports earned 610 million euros for the rehearsal. TAV announced that it will invest 250m euros under the project.

The new terminal was launched on June 15, 2012. TAV Group CEO Sani Sener said: "We hope that the number of passengers will increase rapidly with the new domestic terminal that we plan to open up to service in a short period of time." Accordingly, the completion of the new terminal in 2014 is planned.

The new terminal built by TAV Construction will have a closed area of ​​approximately 200 thousand square meters and will be able to serve approximately 25 million passengers. The project also has 2537 closed parking lots and 3 thousand parking open car parks.

International
The International Terminal is the fourth largest terminal in Turkey with a size of 107 thousand 699 square meters.

Duty-free
The duty free stores in Adnan Menderes Airport International Terminal are operated by ATÜ Duty-Free which is established with TAV Airports and Unifree partnership. A total of 2,353 square meters of shops are served at all hours of the day. There are seven shops on the departure floor and two shops on the arrival floor.

Adnan Menderes Airport
There is an exhibition area on the departure floor of the Adnan Menderes Havaluna International Terminal before passport control. Exhibitions are held throughout the year in the gallery, which opened in February 2011, in paintings, photographs and other similar areas.

General Aviation terminal
The general aviation terminal which is located next to the construction of the new domestic terminal and operated by TAV İzmir serves private air jets. Customs and passport procedures can be made at the terminal.
Adnan Menderes Airport is connected to Akçay Caddesi on the city center. The airport is also accessible by public transport. The suburban line passing in front of the Domestic Terminal carries passengers to the north and south of the city via IZBAN. It is possible to transfer to the Izmir metro from the Hilal and Halkapınar stations on the line. 200 from Mavişehir station, 202 from Republic Square and ESHOT 204 from Bornova metro station provide 24 hours access to the airport. Havaş shuttle buses carry passengers to Izmir's Cesme, Karşıyaka and Konak districts and Aydın's Ephesus and Kuşadası districts from the airport. Taxis and car rental companies also serve at the airport.